Jean Paul Gaultier’s iconic and mischievous little sailor, Le Mâle, is 25 this year. If that doesn’t make you feel old, then I don’t know what will (it certainly made me feel rather ancient, I tell you). That’s a quarter century’s worth of men soaking themselves in far too much of Le Mâle’s distinct and devilish minty barbershop beauty. I can say that, because for 15 of those 25 years, I have been one of them. I still wear it now and I still love it, and for me, Le Mâle will never go out of style.

The success of Le Mâle is really unrivalled in the world of mainstream masculine perfumery and it’s due, perhaps, to the distinct nature of the juice, but also to the marketing which managed to be unashamedly queer enough to set the gays into a frenzy (the advertising heavily references the Fassbinder movie Querelle) whilst also butch enough not to put the straight boys off (they weren’t in on the joke, but they loved its macho nature anyway). So the beauty of Le Mâle really is the fact that it has been worn by all kinds of men (and women, actually) whether they identify as femme, masc or neither of these things. Long may this mighty Mâle reign – that’s what I say!

To celebrate 25 years of sailor shenanigans, Jean Paul Gaultier is treating us to Le Mâle Le Parfum, which appears as a richer, warmer and more intense version of the original. If you think of Le Mâle as the fresh-faced rookie then Le Parfum is the weather-worn captain, but like Le Mâle, he’s still buff af (the rock hard abs and pert bottom on the bottle remain as tight as ever) and very, very hot. So, let’s jump on board and take a good look at this incredibly sexy fragrance that definitely deserves his promotion to admiral of the fleet.

END_OF_DOCUMENT_TOKEN_TO_BE_REPLACED

The success of Jean Paul Gaultier’s iconic masculine fragrance Le Mâle somewhat overshadows the greatness of anything else the brand has created. Many of the Gaultier fragrances that followed – the likes of Fragile and Gaultier² – were just as innovative and remarkable as Le Mâle, even if the market wasn’t quite ready for them at the time. Le Mâle is often talked about and nearly always lauded – I myself have written about it on numerous occasions, partly because it’s an icon, and partly because it played a large part in my formative years – I wore it throughout my adolescence and on many a raucous night out (and in…).

But this article isn’t about Le Mâle, no, Le Mâle gets more than enough attention (cheeky git that he is). This is a celebration of Classique, the feminine counterpart to Le Mâle and Gaultier’s very first fragrance – a perfume that doesn’t get the spotlight anywhere near as often as it deserves or desires. Classique has sat on the shelves of our department stores and our bedrooms for 26 years now and whilst others have come and gone, Classique has remained, proving that a good idea executed at the right time really does stand out. But what makes Classique so timeless? Today we’re going to find out.

END_OF_DOCUMENT_TOKEN_TO_BE_REPLACED 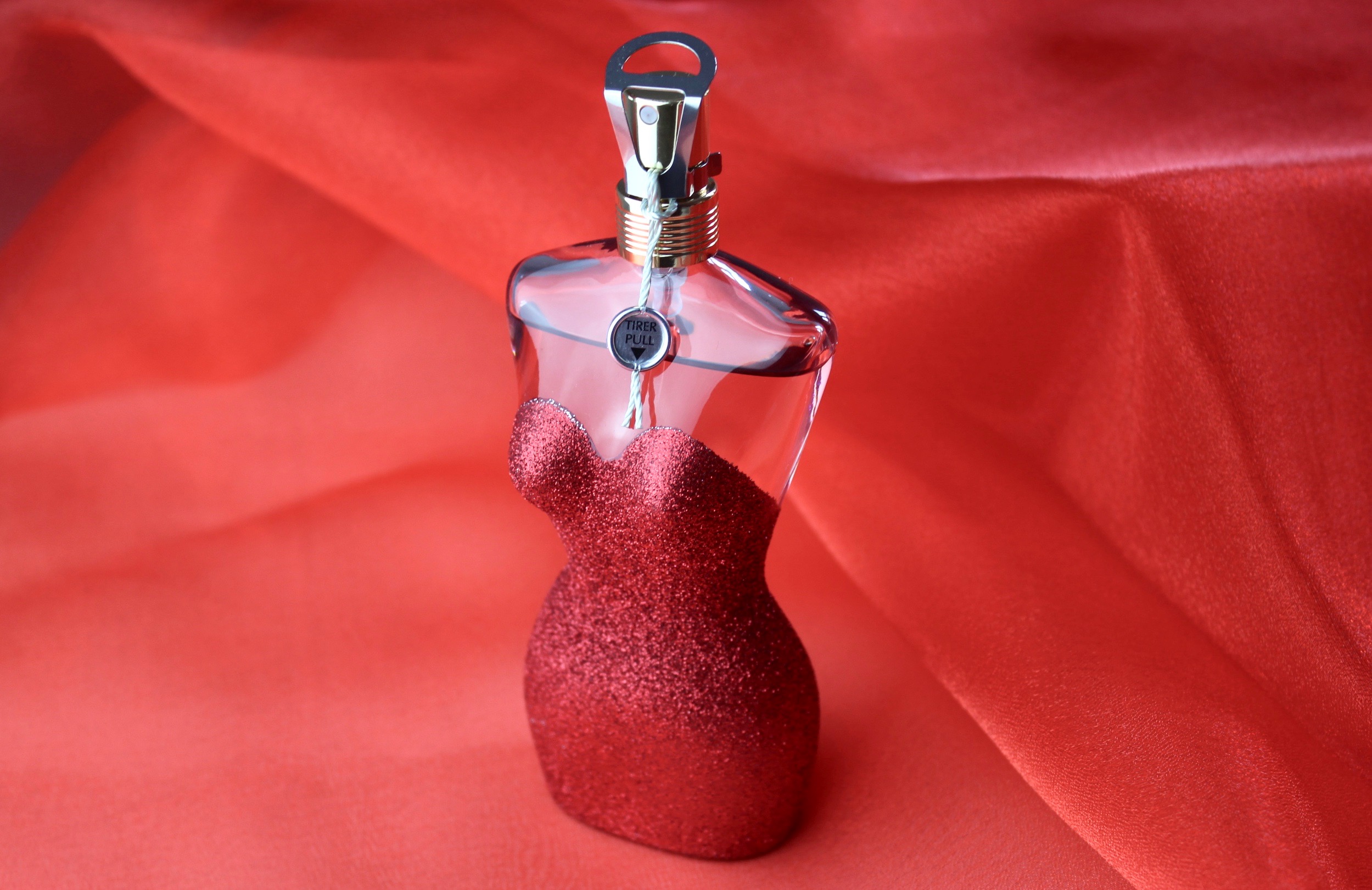 The great thing about packaging your flagship fragrance in the shape of a couture-clad torso is that you can redress it again, again, and again, leaving lots of room for many exciting limited editions. The possibilities are endless and it’s true, Jean Paul Gaultier’s Classique has a vast wardrobe (one that many a supermodel would envy) packed to the brim with corsets and gowns, each of which has been fashioned from the imagination of a game-changing, rockstar of a fashion designer: the cheeky yet supremely talented Jean Paul Gaultier.

For 2019, Classique once again has a new outfit and this time, a new scent to match too. Classique Cabaret is the latest limited edition to launch in the Classique canon and aside from the original, which I love, I’m going to go out on a limb and say that this is the best version yet. Inspired by the cabarets of the 1940s, Classique Cabaret is a light-hearted and liberated fragrance that just wants to have fun. The glitzy-red dress wearing Classique Cabaret blends the signature orange flower of Classique with electric ginger and sensual amber, putting together quite the olfactory show. So roll-up, roll-up, take your seats and get ready for the smelliest show in town: the Jean Paul Gaultier Classique Cabaret!

END_OF_DOCUMENT_TOKEN_TO_BE_REPLACED

Scandal – the brand new fragrance from the one and only Jean Paul Gaultier (‘The Notorious JPG’). Reviewed. On Escentual. Clicky here to read. There is also an epic giveaway on the Escentual site…

END_OF_DOCUMENT_TOKEN_TO_BE_REPLACED

It’s hard to think of a ‘his ‘n’ hers’ perfume duo more iconic than Jean Paul Gaultier’s flagship masculine and feminine fragrances, Le Mâle and Classique. Together they capture the cheeky, sexually-charged and contemporary spirit of fashion’s naughties designed. They changed the way we think about perfume presentation and have managed to remain undated, despite their ever-so-90s aesthetic. Today our fragrant power couple have gone under the knife with olfactory surgeons Daphne Bugey (Classique Essence de Parfum) and Quentin Bisch (Le Mâle Essence de Parfum) to be fitted with an entirely new look, and smell. Click here to check out my full review of the Jean Paul Gaultier Essence de Parfums over at Escentual.

END_OF_DOCUMENT_TOKEN_TO_BE_REPLACED

What do you get when to you take Jean Paul Gaultier’s Le Mâle to the gym and tell him to avoid manscaping for a few weeks? Well, you get Ultra Mâle, that’s what. Ultra Mâle is the latest incarnation of Gaultier’s beautifully buffed sailor boy, and this time our beloved seafarer has gone rogue. Launched to celebrate the 20th anniversary of Le Mâle, and created by the perfumer Francis Kurkdjian (the same dude behind the original) Ultra Mâle brings the (timeless) barbershop fougére bang up to date and places it in a more oriental setting, and a thoroughly rugged one at that. To read my full review on Escentual, simply click here!

END_OF_DOCUMENT_TOKEN_TO_BE_REPLACED

Two of my favourite things in the world have finally joined forces – perfume and pirates. Can you tell that this makes me happy?! The man to link these two excellent forces is none other than the cheekiest chap in fashion, Jean Paul Gaultier, who is just about to launch limited pirate editions of his flagship feminine and masculine fragrances, Classique (Jacques Cavallier; 1993) and Le Mâle (Francis Kurkdjian; 1995).

These two rum-swigging classics certainly know how to dress, rocking tattered striped garb marked with the must have centrepiece for any self-respecting pirate – the skull and cross bones. The scents remain the same masterpieces as ever, a glamorous and sensual floral oriental for Classique and a steroid-fuelled fougére for Le Mâle, with the swashbuckling bottles making for a must-have collector’s item.

So, if you’re looking for a little bit of an adventure on the high seas, then look no further than the fashionable shores of Island Gaultier.

“The intrepid couple. The legendary couple sets out on an exciting treasure hunt, which will take them to the far reaches of the open seas. Determined to face any sort of danger, the pirates raise the black glad and set sail.”

END_OF_DOCUMENT_TOKEN_TO_BE_REPLACED

I’m still alive! Due to being away for work this week, I haven’t been able to turn my attention to The Candy Perfume Boy. I assure you that normal service will resume next week, with more reviews and news from the perfume world. Whilst I may not have had time to put together a post for the blog this week, I have still written for my weekly Escentual column, and this week’s subject is the fabulous, glamorous and radiant new fragrance from Jean Paul Gaultier – ‘Classique Intense‘.

This new scent, penned by none other than Francis Kurkdjian, isn’t your typical ‘intense’ version that amps up the heavier notes and makes for a thicker and long-lasting experience. No, this is Classique with the glamour dials turned right up – a radiant floral vanilla that is the shows topping starlet to the original’s backstage boudoir. Between all that glitter and gold lies a beautifully composed fragrance that is a worthy addition to the Classique lineup. Read my review here.