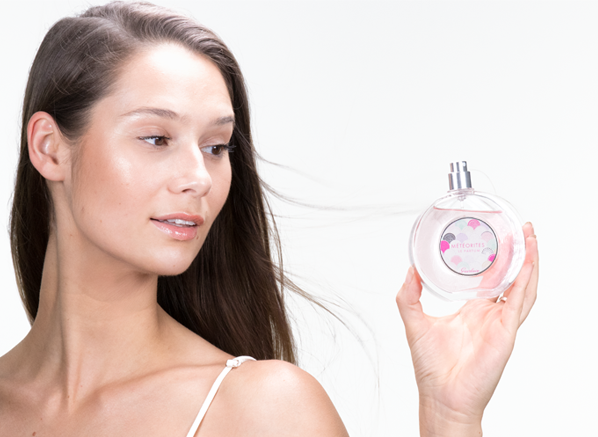 I’m just spoiling you with these Escentual posts this week! This one is my review of Météorites Le Parfum by GUERLAIN – the scent of Météorites Pearls bottled. Click here to check out my review.

END_OF_DOCUMENT_TOKEN_TO_BE_REPLACED

Sunny days are few and far between during these long and cold winter months. The mood can be rather un-sunny too, and a few minutes spent watching the news can lead one to become quite depressed with humanity. That all sounds a bit doom and gloom, doesn’t it? Well, if you’re like me and prone to an odd touch of the winter blues, I have something that may just be the the antidote – it’s called Le Parfum Resort Collection and it comes from none other than couturier Elie Saab and perfumer Francis Kurkdjian.

I have reviewed Resort Collection for my Escentual column this week (click here to view) so I’m not going to go into too much detail about the scent itself, although I will say that it is exceptionally put together and quite classy for a beach-y fragrance, but I do want to remark on how refreshingly consistent the Elie Saab line of fragrances is. Starting with Le Parfum in 2011, Elie Saab has launched a number takes on his signature scent’s radiant orange blossom (a fragrance that perfectly matches the glamour of Saab’s designs, BTW), all of which have been far from bland.

END_OF_DOCUMENT_TOKEN_TO_BE_REPLACED

When Elie Saab released his Francis-Kurkdjian-penned debut fragrance – ‘Le Parfum‘ – in 2011, it quickly garnered praise as one of the most impressive feminine designer launches of the year. Since then it has maintained its popularity, spurring the release of an Eau de Toilette version in 2012 and a brand new intense edition for 2013.

“Inspired by the magical moment of dusk, mysterious and captivating, the floral oriental Elie Saab Le Parfum Intense tells the story of a woman who comes alive as the sun goes down. She is confidence incarnate, and wears her Elie Saab couture like a second skin.”

For Le Parfum Intense, Saab has opted for a perfume that is richer and less diffusive than the original. This particular presentation of Le Parfum serves as a headier and more intoxicating version where the intensity of white flowers is amplified, along with vanilla to create a truly couture experience.

END_OF_DOCUMENT_TOKEN_TO_BE_REPLACED

Following the release of their new fragrance – ‘Le Parfum‘ – historic french brand Carven have scheduled a fragrance masterclass with perfumer Francis Kurkdjian at the luxury London department store Selfridges. Having created Le Parfum and a number of other luxury fragrances, Kurkdjian is a fascinating individual with a unique insight to the perfume industry.

“The afternoon event invites guests to enjoy a glass of champagne and canapés whilst Francis journeys through the intimate and captivating charm that encapsulates the couture spirit of the legendary Parisian fashion house, Carven. Guest will discover the history, delicacy and grace of the Carven woman and discuss the raw ingredients of the beautiful new Carven female fragrance, Le Parfum.”

END_OF_DOCUMENT_TOKEN_TO_BE_REPLACED

The house of Carven appears to be going through a period of resurrection. In 2009 Guillaume Henry took over as Artistic Director of the house, lifting it out of its long-served period of retirement. Now, following the reinstatement of the brand’s fashion line M. Henry has turned his keen eye to the world of Carven Fragrances with the re-issuing of the brand’s classic scents ‘Ma Griffe’ (1946) and ‘Vétiver’ (1957).

In addition to the revival of Carven’s historical fragrances the brand have launched an entirely new flagship fragrance to capture the spirit of the brand. Simply entitled ‘Carven Le Parfum’, the fragrance sets out to embody the energy of Henry’s designs for Carven and create in perfume, the idea of the ‘Carven Woman’.

Le Parfum, which was created by perfumer Francis Kurkdjian (he of Maison Francis Kurkdjian and Le Mâle fame), is described as; “the concept of a sillage that combines several paradoxes, a fresh and ethereal fragrance that is, at the same time, ultra feminine. A fragrance that is as structured as Guillaume Henry’s line of clothing” and created for the Carven woman, who Kurkdjian says is “beautiful without even thinking about it.”

END_OF_DOCUMENT_TOKEN_TO_BE_REPLACED
Despite coming to the Maison Francis Kurkdjian party a little later than mostI can safely say that I am pretty much hooked. Like many I have admired perfumer Francis Kurkdjian from afar, appreciating and enjoying his mainstream creations for designer brands such as Jean Paul Gaultier, Christian Dior and Elie Saab, but it is his Maison with its ‘scented lifestyle’ approach that truly cements M. Kurkdjian as a true talent.

Kurkdjian says of his line: “The range is like creating a wardrobe. You go from casual to evening to couture. And in my vision, what’s missing is a daily ready-to-wear perfume” [2] and with his latest feminine and masculine duo ‘Amyris’ Kurkdjian has filled this void with two suitably pret-a-porter perfumes for the everyday guy and gal on the go.

“Its head is in Jamaica, and its heart in Florence. The Amyris duo evolves somewhere between the flamboyance of the sun and the vibration of the earth.” [3]

Both Amyris scents are centred around notes of Jamaican Amyris (the Jamaican tree which exudes elemi) and Iris from Florence. Each feels like an extension of Kurkdjian’s designer work taken to a niche level of quality where “instant hit” style of mainstream fragrances is traded for the slow burning love of niche perfumery.

END_OF_DOCUMENT_TOKEN_TO_BE_REPLACED

I don’t know about you but I am most definitely suffering from the January blues. Christmas and New Year have gone meaning two things; 1) the weather is just going to get worse (boo); and 2) we all have to go back to work for the foreseeable future (double boo). It’s at times like this that one looks forward to summer, when things seem that little bit more joy-filled and fancy free.

If there’s one ingredient that speaks the words of summer it’s orange blossom. To me it is the smell of the elements of summer, It is the olfactory depiction of the air filled with life; the pollen on the breeze, the flight of the bees and insects, and the hot sticky skin of all humans and animals that live for the sun’s warmth and sustenance.

As a continuation of my ‘Guide To‘ series, and to give you all some much-needed Vitamin C, I would like to share with you my list of reference orange blossoms. These fragrances are the ones that I feel that any person exploring the note of orange blossom should pay attention to. It is by no means a conclusive list and as with the other guides in the series (see Tuberose, Lavender and Oud) it is very much a work in progress with new discoveries to be added as an when it is deemed necessary.

END_OF_DOCUMENT_TOKEN_TO_BE_REPLACED

Elie Saab Le Parfum is the first perfume to be released by Lebanese fashion designer Elie Saab. It was composed by Francis Kurkdjian (Jean Paul Gaultier Le Male, Narciso Rodriguez For Her and Juliette Has a Gun Lady Vengeance etc) and is billed as a Woody Floral.

Ellie Saab Le Parfum is described as an ‘ode to light’.

From the Press Release:

“Composed as an ode to light, ELIE SAAB Le Parfum celebrates the splendor and the brilliance of radiant femininity with a floral solar woody theme. The permanent exchange between flowers and wood is what gives the fragrance such captivating resonance.”