MUGLER may only have one masculine fragrance on the market, the astronomically excessive A*Men (or Angel Men as it’s also known), but they’ve certainly made up for a lack of diversity in their male lineup with a prolific number of flankers. Since its launch in 1996, A*Men has been boozed up, sexed up and made to sit down with a hot cup of coffee to recover. It’s a fragrance that lends itself very well to enhancements and MUGLER have been incredibly savvy with their many interpretations of the scent’s chocolate cacophony, always taking its signature and teasing out an entirely new and exciting facet in the way that a good flanker should.

20 years on and the latest olfactory twist in the A*Men lineup is Pure Tonka an “exhilarating fragrance for a man no one can resist” that sees a “searing fusion between the sensuality of tonka beans and the purity of lavender”. The tonka bean is a staple of masculine perfumery due to its high content of coumarin, which is a key part of the fougére accord. It has a vast and complex odour profile that ranges from hay, vanilla and marzipan to sour cherry, liquorice and clove. In the original A*Men, the tonka bean was merely a small cog within a much larger wheel, which also consisted of other moving parts such as; lavender, mint, coffee, patchouli, tar, vanilla and caramel. In A*Men Pure Tonka, the tonka bean is pulled right into the forefront and centre, and the volume is dialled way up to extreme levels to create a MUGLER fragrance that is really quite something to behold, even by their standards.

END_OF_DOCUMENT_TOKEN_TO_BE_REPLACED

I’m often asking people to sniff things and when I do, a common response is “it’s a bit musky”. This always strikes me as an unusual answer, mainly because many of these fragrances would not be classified as musks in the typical sense. Perhaps people see ‘musky’ as anything that is slightly funky, or perhaps it’s just anything that is difficult to describe and where musk seems like the safe descriptor. Whatever it is, this got me to thinking seriously about what musk really smells like and what it brings to a fragrance.

What I do know however, is that musk is a spectrum, one that ranges from laundry-like purity to animalic pornography. It’s a wide scope for sure and one that traverses a huge range of fragrances. In this post, which is the start of a new series entitled ‘Six Scents’, I take a look at six fragrances on the musk spectrum, moving from the cleanliness of a spin cycle to the shocking sin of a scent between the thighs. Buckle up, fragrance nerds, because this is going to be quite a ride!

END_OF_DOCUMENT_TOKEN_TO_BE_REPLACED 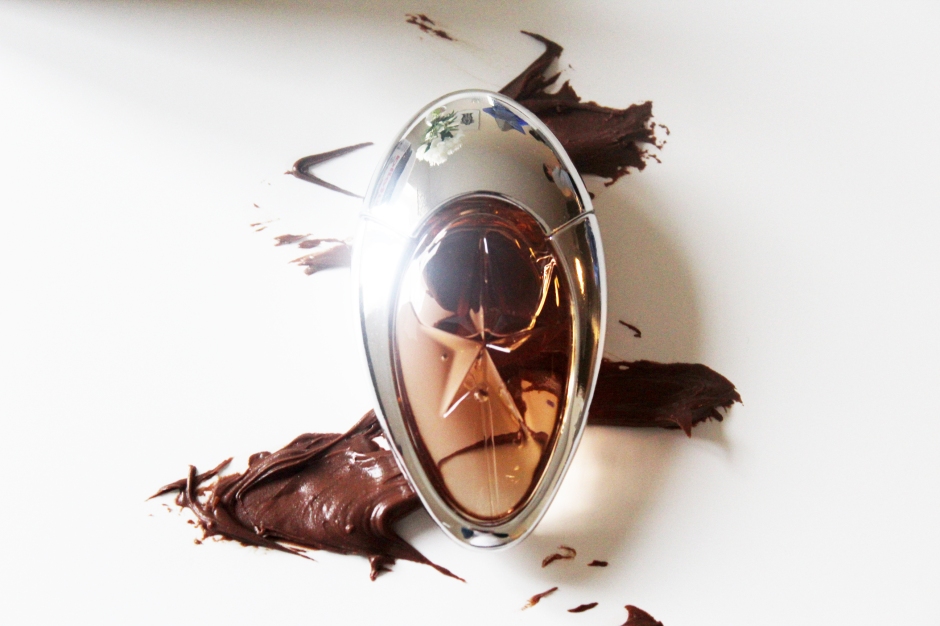 Few things get my pulse racing like a brand spanking new MUGLER launch, even more so if that launch is a spin-off of my all-time favourite fragrance, Angel. So one can imagine my excitement when Angel Muse landed on my doorstep. We’re going to #HateToLove this modern spin on the gourmand queen that is Angel, MUGLER say, and they’re not wrong, because as much as I don’t like to see my beloved celestial being messed about with, I begrudgingly admit (not really, you know I’m here for all things MUGLER) that I do enjoy Angel Muse very much indeed.

Angel Muse was created by Givaudan perfumer Quentin Bisch, who I must say is a real up and coming talent within the industry, having done great work with Etat Libre d’Orange (see Hermann à Mes Côtés Me Paraissait Une Ombre & La Fin du Monde) and with MUGLER on last year’s sticky sweet A*Men Ultra Zest. Bisch is a good fit for Mugler because he is a truly innovative perfumer who seems to work best when tasked with crafting novel accords, such as the popcorn note found within La Fin du Monde. For Angel Muse, Bisch switches out dark chocolate for hazelnut and adds an element of masculinity with vetiver, taking Angel to new and very modern heights.

I wrote a full break down of Angel Muse for my Escentual column a few weeks back (clicky here to give that a read), so I’m going for a review en bref today. I also wanted an excuse to buy a jar of Nutella to use purely for photographic reasons of course. Although, it would have been a waste not to have a spoon or twelve now, wouldn’t it? So let’s get to it and give Angel Muse a good sniff to see whether it is as delicious and divine as Nutella, or whether it falls short of its lineage…

END_OF_DOCUMENT_TOKEN_TO_BE_REPLACED

In the 1920s, the legendary Spanish painter Pablo Picasso was driven to move away from cubism and paint in the style of the classics, just to prove that he could. Having always been at the forefront of modern perfumery, the equally iconic house of Mugler have decided to make a similar move with their latest collection of fragrances: Les Exceptions. Mugler create bold, extra-terrestrial fragrances that are far removed from the tropes of modern perfumery. They do not follow genres or olfactory families, they create them, having famously crafted the oriental gourmand genre with Angel, the solar woody genre with Alien and the, err, well, whatever genre you could classify that weirdo, Womanity as – bioluminescent fruit, perhaps? In fragrance Mugler are the leaders, not the followers.

END_OF_DOCUMENT_TOKEN_TO_BE_REPLACED

The legendary house of Mugler does not create fragrances, they birth legends and raise celestial beings. As a couturier, Thierry Mugler crafted clothing that released the inner goddess or demon of the Mugler woman, turning them into vast Glamazons and Dominatrixes. His fragrances are no different: they are the strength, the passion, the beauty and the force of women, with each one, Angel, Alien and Womanity, possessing a bold character that celebrates the unending beauty of fascinating and strong women.

These three idiosyncratic icons, Angel, Alien and Womanity, cast large, Amazonian shadows that dim the lights of most things around them, so I’d like to shed a little light on a Mugler that doesn’t always get the attention that it deserves. I’m referring to Innocent, which is currently exclusive to Mugler online and some travel retail locations (let’s say thanks to the brand for still making it rather than discontinuing it, as many would). Innocent shines brightly in its own way and it deserves a little attention every now and then because it celebrates all that is Mugler but approaches this spirit from an entirely more dressed down place.

Innocent was launched in 1998 as ‘Angel Innocent‘ and was created by perfumers Laurent Bruyère and Dominique Ropion. As Luca Turin says in Perfumes : The A-Z Guide, it was the first “authorised clone” of Angel, working as a less confrontational and challenging version of Mugler’s flagship fragrance for those people that couldn’t quite handle all of Angel’s angular volumes. Essentially, the fragrance takes the DNA of Angel, retaining its fruity and gourmand facets in a lighter way, but dialling right down on the butch patchouli that makes Angel so, well, Angel! The result is a delightfully bright and cheerful version of Angel that definitely feels like her spawn, but is different enough to craft its own niche. Just as Mugler describes, Innocent is a mischievous and flirtatious take on a legend.

END_OF_DOCUMENT_TOKEN_TO_BE_REPLACED

It was reported last week that NASA had found evidence of liquid water flowing on Mars. The red planet is no longer a dry, and arid collection of rock and dust, it seems. In other surprising and space-related news, Thierry Mugler has made the decision to launch a limited edition version of Alien called ‘Alien Oud Majestueux’, an oriental fragrance that sees the hyper-jasmine of the original accompanied by oud, the ever popular heartwood extracted from the Aquilaria tree, and seen so often in modern fragrances over the last few years. Composed by the masterful Dominique Ropion, who co-signed the original with Laurent Bruyere, this new version of Alien promises to tantalise with its opulent spices and sweet flower nectar. Colour me intrigued.

Now, I must confess that the news of an oud-injected version of Mugler’s successful Alien did arouse some titters on Twitter in addition to the usual moans about the over-exposure of everyone’s favourite noble tree rot. Of course, Mugler has all but resisted the oud trend for quite some time (although, they have flirted with the note in their Miroir Miroir! series) and the fact that the last non-oud converted bastion of the industry had finally given in did elicit a sigh or two, from yours truly included. As time progressed however, the idea of an Alien oud grew to be an interesting one. I mean, Alien is a pretty fierce woody jasmine fragrance that lends itself well to remixes (see Alien Essence Absolue & Alien Le Goût du Parfum), and a middle-eastern take on an intense, space-age floral actually seemed like something worth sniffing. At risk of spoiling the rest of this review, I can confirm that it is.

“Cocoon your mind, body and soul in Alien Oud Majestueux, the new oriental fragrance. This scent will transport you to the spice markets of the Middle East where your senses will be tantalised with the fragrant notes of opulent spices and sweet flower nectar.”

END_OF_DOCUMENT_TOKEN_TO_BE_REPLACED

“Alien is the very essence of femininity, it’s femininity incarnate. And femininity is a gift from heaven, a generosity, an instinctive intelligence.”

A long time ago in a galaxy far, far away, a silence overtook the stars. Thirteen years had passed since the Empress Angel ascended her galactic throne, and loneliness had taken hold in her couture heart. All around her she saw nothing but copycats, pale imitations and weaklings that couldn’t live up to her fierceness, her avant-garde angles nor the sheer power of her olfactory force. She was a supernova of edible treats over a dark nebula of patchouli and the others couldn’t compete. Angel longed for a sister, an extract of her fearless DNA that danced along the same double helix. Little did she know that she would get more than she bargained for, and she imagined into being a friendly rival who shone brightly over the galaxy and threatened her reign. Or something like that, anyway….

Back on Earth in 2005, 13 whole years after launching his debut fragrance, Angel, fashion designer, Thierry Mugler launched Alien, his sophomore perfume. Few designers and brands are so patient however, the Mugler model is one of perseverance where fragrances are allowed the time to find their target market, and to grow fondly in the hearts of their fans. Take Angel for instance, a perfume that was as divisive as Marmite when it was launched, and in fact, still is to this day. Mugler and Clarins (who hold the Mugler license) started with a small launch and invested both time, and care in slowly building a fan base, and a name for their product until it became one of the best selling fragrances in the world – an accolade that it still holds today.

Both Alien and Womanity (2010) have followed this blueprint, receiving long-term success rather than being quickly canned if they weren’t immediately successful in their first few months on the market. That said, Alien seems to have been fairly popular right from the outset, due perhaps in part to the fact that, whilst it is utterly distinct (there really is nothing quite like it still to this day), Alien isn’t quite as hard to get along with as the others. Don’t get me wrong, Alien is still a complete weirdo of a woody jasmine, but somehow it manages to bridge the divide between fantasy and reality, making for an accessible olfactory experience, enjoyed in full 3D and iMax.