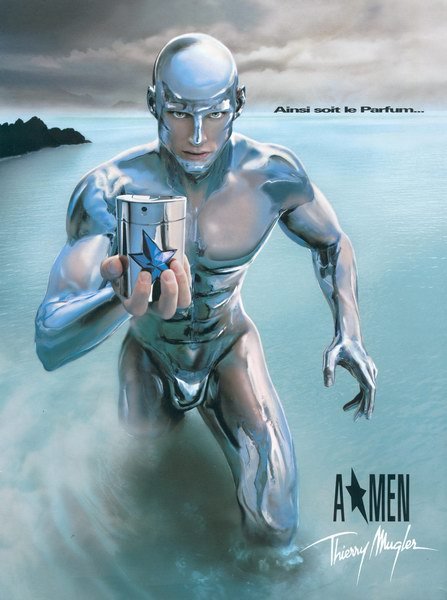 It’s no secret that I am pretty much THE Thierry Mugler Fan Boy and there’s nothing that I enjoy more than a trip to Planet Mugler, but would you believe there was a time, many Mugler moons ago, when I really didn’t like the Thierry Mugler perfumes? I don’t think I have ever been more appalled by two perfumes in my entire life than when I tried both Angel and A*Men for the very first time. To call them an ‘assault on the senses’ would be a dramatic understatement. But as you know, tastes change and I kept coming back to them. There was just something alluring about this ‘assault’ that I couldn’t quite put my finger on, and it wasn’t long before I ended up buying my first bottles of Angel and A*men. That’s when my Muglerian-obsession started.

A*Men, or Angel Men as it is often referred to, was Thierry Mugler’s first, and currently the brand’s only, masculine fragrance. Released in 1996, it was created to be a masculine interpretation of the already-quite-masculine Angel, released four years previously. With A*Men, Mugler was inspired by the comic book superheroes of his childhood, and in particular his favourite hero ‘The Silver Surfer’.

Since its release A*Men has become somewhat of a cult fragrance, and has spawned a number of pretty decent flankers including; A*Men Pure Coffee, A*Men Pure Malt, A*Men Pure Havane, A*Men Le Goüt du Parfum and A*Men Pure Shot (to be reviewed tomorrow). Does A*Men deserve cult status? Absolutely! There is nothing else quite like it around, and love it or hate it, you cannot deny just how innovative and unique it is.

“A*Men is a scent of contrasts. A Play between metal and skin, between power and sensitivity.” [1]

Looking at the above list of notes you could be forgiven for thinking; “Lavender? Peppermint? Coffee? Vanilla? Chocolate? Patchouli? TAR? How the heck does that all fit together?!” But remember, this is Thierry Mugler we are talking about, it may be unusual, it may even be slightly terrifying, but ultimately, you know that it’s going to work.

A*Men opens with a cacophony of ingredients, it is loud and proud to say the least. The first thing I pick out is the bergamot, the most bright and sparkling of citrus fruits that adds a real element of effervescence over A*Men’s deep, rich heart and base. Next to the bergamot lies the distinct aromas of lavender and peppermint, both of which share a herbal, almost camphorous facet that plays nicely with the bergamot.

As the deep and rich notes come through it becomes very clear that A*Men is a pure gourmand. Like Angel, A*Men’s central accord is based around the pairing of foody notes such as chocolate, caramel and vanilla with a great big stonking dose of patchouli. The patchouli, along with the burned rubber notes of the tar, acts as a strong contrast to the huge load of sweetness that emanates from the foody notes as well as adding a slight earthiness and amping up those camphorous aspects of the mint and lavender. It is very difficult to describe just how good this contrast is!

The only downside to A*Men and its juxtaposition of sugar and patchouli is that it is an undeniably heavy fragrance. When sprayed liberally it’s quite easy to asphyxiate underneath A*Men’s colossal sillage, but when used sparingly (and I’m talking one or two sprays here) it really is heavenly, and it lasts, and lasts, and lasts!

Another thing that A*Men shares with Angel is an amazing dry down. Once the patchouli and tar has dried down to nothing more than a mere hint of their former glory, you are left with a wonderfully creamy, sweet base of vanilla, chocolate and caramel, it is simply delicious and is by far my favourite part of A*Men. At this point you start to smell almost good enough to eat. Almost.

A*Men is a dramatic, showy fragrance that is the perfect counterpart to the ‘Olfactory-Drag-Queen’ that is Angel. It also perfectly epitomises all that is Mugler and for that reason it may not be the first fragrance you would pick out for those more serious of occasions, but for everything else it is simply perfect and I would go as far as saying that it is one of the greatest masculine fragrances of modern times. 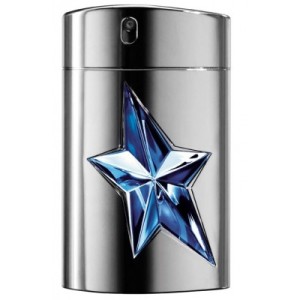 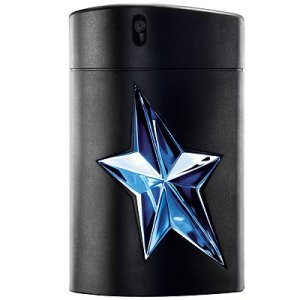 Just like its sister perfume Angel, both of A*Men’s flacons are centred around Mugler’s signature blue star. This time however, the theme is very much more masculine and less theatrical.

A*Men is available in two bottles – a refillable, silver metal flask and a black rubber flask. The metal flask is refillable and feels like a more luxe version of the rubber flask, which is ideal for carrying in your bag.

Mugler really excels when it comes to bottle design and the A*Men bottle is no exception. The bottle sits comfortably in your hand and its ergonomic design seems perfectly suited for the active man.

For A*Men’s flankers the bottle and star have been dressed in various shades and colours, from bottles of deep brown to stark white and with golden to hot red stars.

This review is based on a sample of A*Men provided by Thierry Mugler.