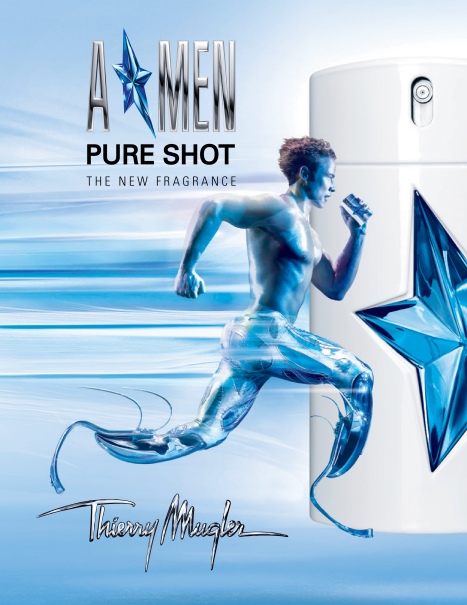 The appointment of Olympic sprinter Oscar Pistorius as the new face of Mugler’s flagship masculine fragrance A*Men last year marked a new chapter in the brand’s superhero saga. Pistorious plays the part of the ‘Bionic Fawn’ and he perfectly embodies the Muglerian style of high-energy futurism taken to the limit.

Thierry Mugler is known for bold statements and the use of a Paralympian, who just happens to be the hottest name in sport right now, is an encouraging display of diversity from a major brand. If only others would follow suit! Pistorius is an inspiring person and an inspired choice for the brand. He very much deserves his place alongside the likes of Jerry Hall, Eva Mendes and Naomi Watts as a citizen of Planet Mugler.

For 2012, the year of the London Olympic Games, Pistorius reprises his role of the Mugler man for the brand’s latest fragrance ‘A*Men Pure Shot’. A*Men Pure Shot, created by Jacques Huclier, is the latest limited edition flanker of the original A*Men which was released in 1996. It follows Pure Coffee, Pure Malt, Pure Havane and A*Men Le Goût de Parfum in the A*Men series, and it’s fair to say that it is the most unique and surprising incarnation of A*Men so far.

Inspired by Oscar Pistorious, Mugler’s “modern day hero”, Pure Shot is Mugler’s entry into the plethora of Olympic-themed sport fragrances that we’re going to see this year. But as we know, Mugler does things a little bit differently and has to be given Kudos for not including ‘sport’ in the name, and for actually creating a sport-themed fragrance that doesn’t smell bland or cheap. Mugler describes Pure Shot as “a performance booster for seekers of strong, inspiring scents”.

I was lucky enough to be invited to the Press Launch of A*Men Pure Shot on Tuesday for an ‘Olympic Performance Breakfast’ hosted by Oscar Pistorius and the Thierry Mugler team. For me, as a self-proclaimed Mugler Fan Boy, this was a pretty awesome experience and it was great to meet the incredibly passionate creative team behind the brand as well as Oscar, who is as charming (and handsome) as you would expect. It also allowed me to gain a great understanding of the inspiration behind this exciting new fragrance.

A*Men Pure Shot is based around three accords – Boost, Adrenaline and Strength. It opens with ‘Boost’, a bracing accord of mint (a note used in the original) and juniper. A good mint note in a fragrance is hard to find, but when it’s done well (a la Geranium Pour Monsieur, Guerlain Homme and Heeley’s Menthe Fraiche) it can be really wonderful. The mint in Pure Shot is fresh, ice-cold and green with a decent, but in absolutely no way overbearing, amount of menthol. The juniper adds adds a nice herbal touch to the opening, but it never smells anything remotely likely gin, thanks to the accompaniment of some shimmering citrus fruits.

The heart, or ‘Adrenalin’ accord is a soft blend of spices, namely white pepper and cardamom. What I really like about the spices in the heart is that they manage to be zingy and spicy yet cold and icy. This “spicy injection” as it is called (or “spicy discharge” as Mugler’s Olfactive Director, Pierre Aulus, wanted to call it) gives Pure Shot a real sense of energy and speed, as if it’s ready to sprint off the starting block at any moment.

One of the best parts of the original A*Men was its rich base, and it’s great to see that Pure Shot, which can quite easily be described as fresh, still manages to maintain a great deal of that signature base accord that really makes A*Men so great. The base is called the ‘Strength’ accord, and takes its name from the olfactory brawn that is rich patchouli and spicy sequoia wood. This duo of strong materials smells great, the patchouli is like warm earth and when mixed with the spicy sequoia (a brief nod to Mugler’s discontinued B*Men) gives the impression of the sweaty, masculine skin of an athlete. Underneath all of that masculine energy is a soft, yet dry vanilla that rounds the whole thing off rather nicely.

A*Men Pure Shot is the most dramatically different of the A*Men ‘Pure’ series, it is a thousand times lighter and easier to stomach than the original. It actively emphasises A*Men’s fresher, lighter aspects whilst retaining its signature – it is still recognisably A*Men, there are still accents of coffee and chocolate, however they are much more subdued. When I say it’s light, I should make it clear that it is light by Mugler standards, which means it still has a heck of a lot of presence and as you would expect the longevity is impressive. That said, it doesn’t have as much oomph as I would like, especially after the bracing opening dies down, but that’s just a minor niggle in an overall solid offering.

A*Men Pure Shot is the summer version of A*Men that Mugler has attempted before (see Ice*Men), but never seemed to be able to get right. It is fresh and sporty, two words that usually spell disaster for a modern masculine, but it’s sport done the Mugler way (there is nothing ‘aquatic’ here), which means that it is completely unique and unlike a lot of the other Mugler fragrances it is effortlessly wearable. Here’s hoping that they have the good sense to make it a permanent addition to the collection. 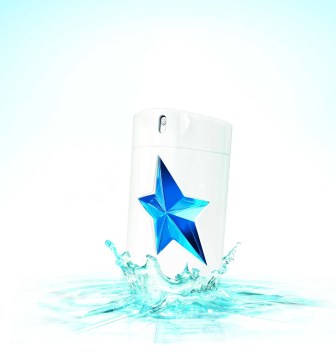 I’ve said it before, and I’ll say it again – Mugler excels when it comes to bottle design.

For Pure Shot the usual A*Men bottle is dressed in glossy white rubber and Mugler’s signature star is coloured in a beautiful shade of turquoise.

The shade of the star and the almost clinical quality of the rubber hints at the fresh, invigorating juice that it contains.

This review is based on a sample of A*Men Pure Shot provided by Thierry Mugler.

All Images and quotes via Thierry Mugler.