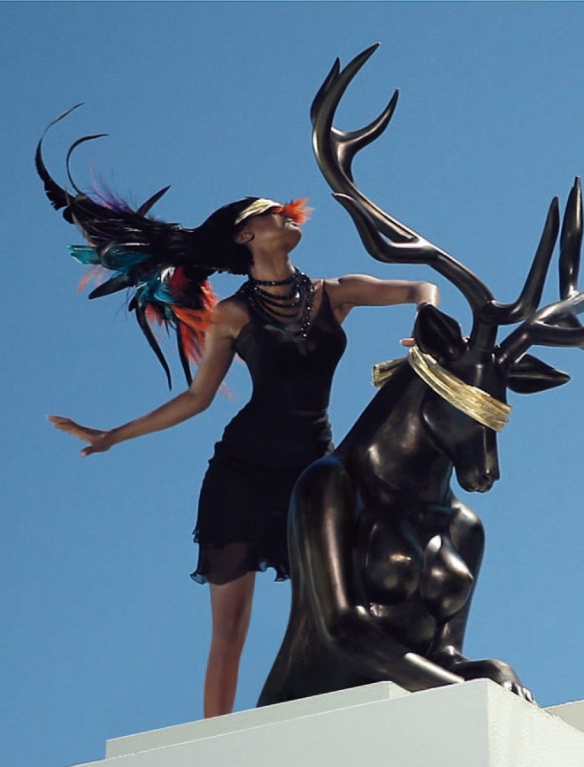 OK, I may not be ‘woman’ but Womanity most certainly is, she is all woman and she definitely knows how to roar.

Womanity was released in 2010 and is the latest feminine fragrance by renegade fashion house Thierry Mugler. It is the house’s first major feminine release (i.e. not a flanker) since Alien in 2005. The fragrances is described as a woody oriental and is based around a juxtaposition of sweet and savoury notes

To coincide with the release of Womanity, Mugler also created a social network site womanity.com which, just like the fragrance, celebrates ‘the invisible bond between women’. I have to admit that I find the concept more than a little bit tedious…

First things first, we need to discuss the giant elephant in the room – the name. ‘Womanity’ is intended to be a portmanteau of the words ‘Woman’ and ‘Community’, it also wins the award (in my book) for the stupidest name for a fragrance ever. Anyway the name is inconsequential to the scent so I’ll get onto the important stuff – the smell.

Womanity opens with a big blast of citrus, the citrus is zingy and mouthwatering just like freshly squeezed orange juice. This is STRONG citrus and the zinginess lasts for a few minutes before settling down and making room for the other notes. I don’t really detect any of the listed green notes.

As I have already mentioned Womanity is a juxtaposition between sweet and savoury notes, the sweet comes from fig and the savoury from caviar. The fig is multi faceted, it’s milky, sweet, fleshy and although it may not be a hyper-realistic fig note a la Philosykos by Diptyque it is a good interpretation. As the fragrance progresses the fig becomes sweeter, jammier and more candied.

The press material puts a lot of emphasis on the caviar accord, and there is definitely a salty, savoury aspect to Womanity but I wouldn’t say that it smells like caviar. The savoury tone is much more bread-like than anything that resembles caviar, to me it smells like cookies, slightly yeasty and only a tiny bit salty.

The candied fig lasts all the way to the dry down where it’s joined by vague, warm woody notes. The base doesn’t hold the same magic as the first couple of hours and Womanity does feel as if it’s a tad unfinished, perhaps some vanilla would have rounded it off nicely.

Womanity is a relatively fresh fragrance, it is lighter & fresher than other Mugler fragrances and the sillage is sheer, airy and slightly aquatic, but it is still a Mugler and it of course has massive potency and longevity, in fact I would say that it is one of the strongest Mugler fragrances, this is bad news if you don’t like it – there is no escape!

I wouldn’t say that Womanity is on par with the two other Mugler feminines (Angel and Alien), to me they are exceptional fragrances, and it definitely isn’t my favourite, that said Womanity isn’t without it’s merits. Womanity is an interesting fragrance, the savoury/biscuity notes are unusual and it stands streaks above a lot of the fruity trash available on the market, it’s worth a try and it seems to already be causing polar reactions of love or hate. 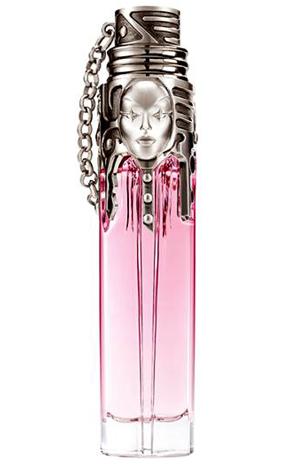 I can’t finish off this post without talking about that bottle. In my post on fragrance bottles I said that:

‘Womanity stands tall like a pink totem designed by H.R. Giger for the film Alien. It is at once extremely feminine yet it has a definite masculine edge thanks to the metal tattoos and biker chain.’

The drama of the bottle more than makes up for the absolutely shocking name and slightly cringeworthy concept behind the fragrance. There is also a ring containing a solid version of the fragrance that is just as breathtaking.

Womanity is available in 10ml, 30ml, 50ml and 80ml Eau de Parfum and matching body products, it is ever so slightly cheaper than the other Mugler feminines and prices range from £19.00 to £66. Womanity can be purchased from most good department stores and online retailers.

This review is based on a bottle of Womanit Eau de Parfum from my own collection.