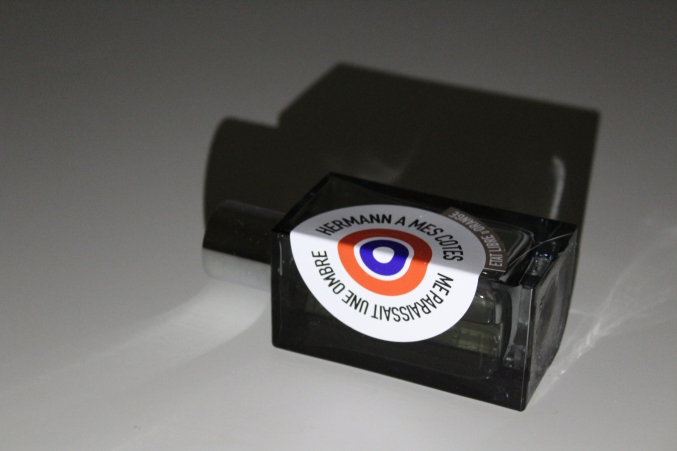 Etat Libre d’Orange have moved into a new phase. Gone are the hilarious, shocking and hyper-sexualised names, and cartoons, all in favour of concepts inspired by Nijinsky’s ballets and poems by Victor Hugo. They seem to be treading a more serious path and elevating their olfactory art to a higher level. I think it’s a good move, one that will prevent them from being pigeonholed as the antisocial abuser of good taste. That rebellious and crass streak still exists – the spirit is very much alive in the brand’s back catalogue, but for now, Etat Libre d’Orange want to stand out for being innovative, not for being innovative and rude. I say power to them.

Hermann à Mes Côtés Me Paraissait Une Ombre, or ‘Hermann‘ for short, is inspired by Victor Hugo’s poem ‘What Two Horseman Were Thinking in the Forest’ and was created by Givaudan perfumer Quentin Bisch (La Fin du Monde & Ambre Imperial). The perfume plays with the idea of shadows, with shade serving as our companion or even our fragrance. They call it your alternate self – that side of you that is always there, whether it can be seen or not. Perfume too, can be a second self – a character we wear to send a message about who we are and who we want to be. But what happens when that second skin talks back? Etat Libre d’Orange seems to want to find out.

Hermann opens with a big blast of blackcurrant, pepper and rose. Things are incredibly tart, juicy-sweet and crackly-metallic. It feels alive and energetic but not bright, in fact there is a distinct darkness to the proceedings that is moody but not unsettling. It’s a comforting darkness. The rose itself feels blood red, almost as if every drop of ruby plasma is being squeezed from its core. Underneath the initial juice and crackle is a heavy galbanum note, the weightiest of all Hermann’s parts. Rather than smelling bitter in that ‘boardroom bitch’ of a way that galbanum usually does, the note is almost a herbal sort of green here, with a razor-like edge that cuts straight through the heart of the rose. So yes, there’s a lot going on up top.

What makes Hermann so interesting is its presence rather than its odour profile. The fragrance boasts a wide range of nifty synthetics that all come together to create something hard to pin down but impossible not to experience. Calypsone, adds a layer of ozone, with a sharp citrus edge, and Geosmin provides an earthy petrichor effect, whilst Petalia extends the fruitiness of the rose. All together, these materials create an ethereal air that is sharp and moody with a tension that is palpable. Somehow, Hermann is more about feeling than smelling.

As Hermann dries down, which it does quickly and efficiently, it subdues rather than transforms. The fruity and juicy facets, namely the rose and the blackcurrant both take a back seat as the ozonic, metallic and peppery sections step up to the plate and take over. It’s at this point that things become somewhat of a disappearing act and it wouldn’t be over the top to say that Hermann really wears as more of an aura than a skin scent or sillage monster. In the end, it settles to a gentle hum of pepper and rock dust caught in a soft breeze. What a journey, eh?

Hermann à Mes Côtés Me Paraissait Une Ombre is the shadow of a rose. It’s a rose sensed from a distance, behind foliage and in the dark. It’s a rose that you can smell, but can’t see or place, you just know it is there. Never before have I tried a fragrance that wears in such a unique way. Initially, there is so much going on: tart blackcurrant, juicy rose, metallic pepper and bushy galbanum, but then ‘poof’ it all disappears into the ether. Hermann really does wear like a shadow. Throughout the day, generous wafts of dark, alien rose rise up from the skin as a reminder that yes, your shadow is still there and perhaps, it may want to talk to you. It is truly remarkable.

Disclaimer
Sample, notes and quotes via Etat Libre d’Orange. Images are my own.