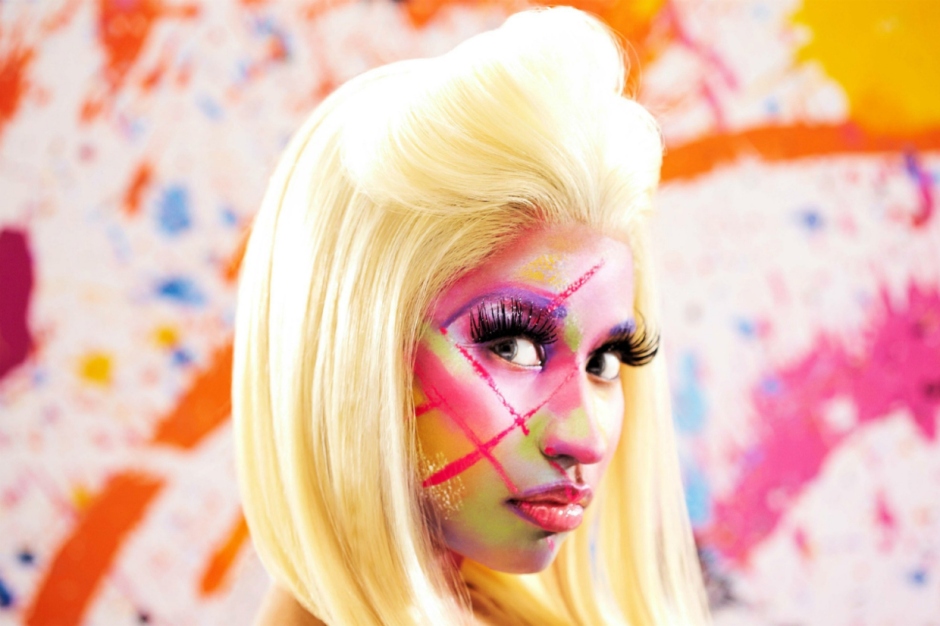 I have decided that due to the overwhelming number of abysmal celebuscent (celebrity perfume) launches the celebrities of this world simply cannot be trusted with their scent choices. So, as a remedy to their poor choices, and to avoid having to reach for the smelling salts to revive myself from bad-celebuscent-induced hysteria, I have chosen to start the Scent a Celebrity Series.

So far I have picked scents for everyone’s favourite Puppet/Marionette hybrids – The Muppets – and the love-her-or-hate-her Icelandic songstress Björk. Today I’m going to be picking scents for a relatively new kid on the block and another love-her-or-hate-her celebrity, but this one is likely to ruffle a few more feathers than Björk, even when she is donning her infamous swan dress. Ladies and gentleman I introduce you to Miss Nicki Minaj.

Nicki Minaj is not your typical bubblegum-pop-princess, she is a foul-mouthed, schizophonic rap-Barbie with a penchant for unusual vocal tricks and hyper-fast rhymes. She has successfully crossed the divide between pop & rap, and although her many alter egos and sonic styles can, at times, sound cluttered (and like they are in need of some serious editing) she is redefining the way two of the biggest music genres combine whilst being utterly fabulous at the same time.

“You don’t like them disses, give my ass some kisses”  – (Probably NSFW)

Picking scents for such a colourful individual as Nicki Minaj is no mean feat, after all, how exactly do you find a perfume to match someone with such a vibrant and varied personality? For someone who can be bubble gum princess by day or her gay male alter ego (Roman Zolanski) by night? Each of my perfume choices reflects just one, or maybe two facets of her character. As you might expect, each perfume has an incredibly strong spirit and defined presence.

This one is for Nicki’s bubblegum side, the ‘Super Bass’ side if you will. I don’t really see Miss Minaj as a floral kind-of-gal but I can imagine her rocking the bubblegum-tuberose of Vamp À N.Y., the all natural and all frivolous perfume from french house Honoré des Prés. Despite the name, this fragrance isn’t particularly vampish but instead it is best described as colourful and exuberant, which makes it just perfect for Nicki’s fun side. Oh and she is from New York (via Trinidad) so it’s pretty much spot on!

Nicki’s potty mouth and sometimes hyper-sexualised image will probably never earn her the title of classy. But who wants to be classy when you could be fabulous? Rush is a perfume that chooses to be tacky and frankly it doesn’t give a damn what you think. Nicki Minaj is exactly the same, she says what she wants, wears what she wants and if I have anything to say about it she is going to smell like what she wants too!

Just like Nicki, the plastic, amyl-nitrate drench florals and HUGE patchouli of Rush are what I would call the ‘best kind of tacky’.

A performer with two identities, one strong & feminine and the other angry & masculine, perfectly suits the duality of Thierry Mugler’s iconic Angel. Angel’s notes of caramel, chocolate vanilla speak to the softer persona that is Nicki Minaj and it’s big angry patchouli notes speak to the ferocious frustrations of Roman Zolanski.

Angel not only speaks the same language as Nicki and Roman but it also speaks them at the same volume, with the dial firmly set to ‘loud and proud’. Like all beautiful things it calls to you but whispers ‘proceed with caution’.

What perfume would suit a gender-bending split persona such as Nicki Minaj more perfectly than Ladyboy? A perfume so novel and fun that you could be mistaken into thinking that there is no substance beneath the funny surface of banana absolute, and yes that would be a mistake, because like Nicki there is a darkness that lurks just under the skin, fighting to break free. Ladyboy would be Nicki’s all-rounder, it would cover all bases of her personality and I can imagine her pairing it with that striking yellow lipstick showcased in the above video.

Nicki Minaj – love her or hate her? Discuss.

What perfume would you choose for Nicki Minaj?

Do you agree with my choices?

Please leave your thoughts in the comments box below!