I challenge you to find me a more iconic modern masculine fragrance than Terre d’Hermès. Go on, I’ll wait… OK, so I’m sure there are actually quite a few modern masculines out there as good this iconic ode to the earth and sky created by legendary perfume Jean-Claude Ellena (formerly the in-house Perfumer at the brand), but still, it’s one of the very best, not to mention the most unique mainstream masculine offerings out there.

For Hermès, the aesthetic design of their olfactory output is as important as the fragrances themselves. Hermès is a luxury brand and they present their distinct fragrances in innovative, high-end flacons that capture the heritage and eccentricity of this idiosyncratic house. Terre is no exception, with its solid, statuesque H-shaped flacon of weighty glass featuring a twistable spray mechanism – showcasing heritage and innovation in one handsome object.

For this 2019 limited edition flacon, which is available containing the original Eau de Toilette concentration and the later-launched Parfum concentration, Hermès has collaborated with English illustrator and designer Liubov Edwards, who was chosen out of 2500 artists and 636 designs to create the flacon after winning a competition the house had launched on the designboom platform.

Liubov Edward’s winning design sees the classic Terre d’Hermès printed with a striking geometric design in reflective silver. These chrome squares and diamonds form a deconstructed ‘H’ that evokes the idea of the house moniker blown by the wind. Hermès have created many limited edition bottles for Terre d’Hermès (they do one annually, I think) and this one is easily one of the most subtle, but in a way I feel that makes it more effective. The design is elegant and modern, two things one always associates with all things ‘Hermès’. 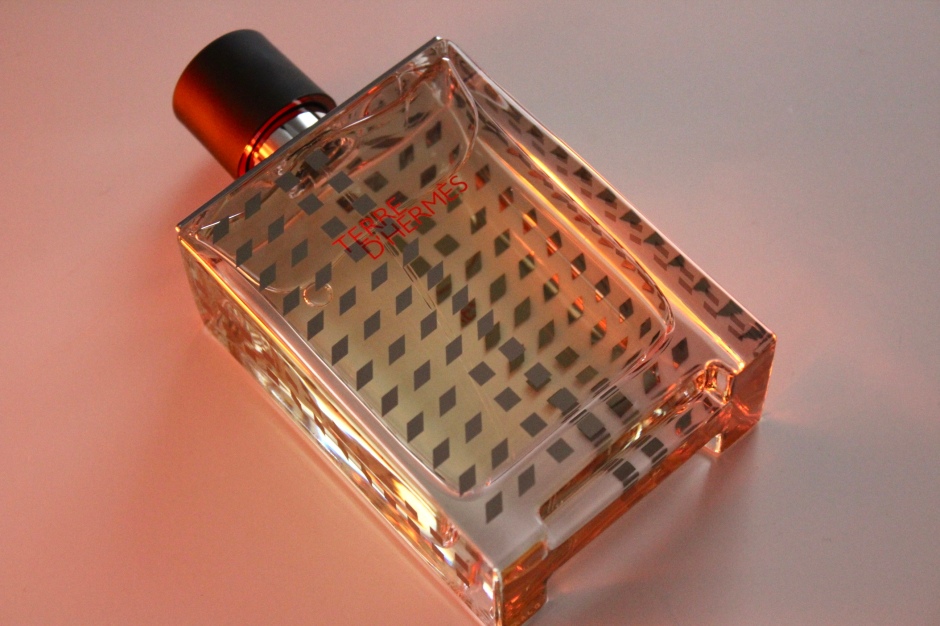 But what about the fragrance? Well, this is a limited edition bottle, not a limited edition fragrance, so Terre d’Hermès remains unchanged in both its Eau de Toilette and Parfum concentrations. I was sent the EdT, which is my favourite of the two. To me, it smells like the softest orange earth – it is flinty and cool, with a mineral, ozonic air accented by pepper and the warmest, out of focus citrus notes. There really are few things out there as good as this and when something so good is presented in a bottle so beautiful, what’s not to love?

Sample, notes, and quotes via Hermès.